The 59th National Amateur Golf Championship of Pakistan commenced yesterday here at the Islamabad Club Golf Course after the first round was lost to rain on Thursday and the championship had to be reduced to three rounds as against the four rounds championship originally proposed. The first round brought refreshing news for Pakistan as a two-member Pakistan team, comprising of Taimoor Khan and Zohaib Asif, prevailed over a two-member Sri Lankan team of Punith De Silva and Udesh Perera. This is a traditional event that was introduced in 1980s and the contest is between Pakistan and Sri Lanka and the fight spans over 18 holes. Taimoor had a round of gross 73 while Zohaib Asif came up with a round of 75 giving Pakistan an aggregate score of 148 as against the Sri Lankan team’s aggregate score of 156. The margin of victory for Pakistan was eight strokes.

In the race for honours in men’s individual category, after the completion of the first 18 holes, in this national title bearing championship, hosted by the Pakistan Golf Federation, Ghazanfar Mehmood of Garden City Golf Club played reliable and steadfast golf to set the tempo in this event. His opening round score was a laudable par 72 and this represented the best performance of the day out of 77 other fancied aspirants. Some of whom found their hopes battered and dashed as inaccurate shot-making resulted in disappointing scores and made them look casualty oriented. Although Ghazanfar appeared as the leader with a round of gross 72, he found the challenge from at least two rivals a bit too intense. Defending champion Taimoor Khan was placed one stroke behind at a score of gross 73 and also at 73 was seasoned Tariq Mehmood of Federal Golf Association. In the inter provincial team match, the Federal Golf Association came out as the notable one as their players Umer Khokher, Raja Israr, Tariq Mehmood and Zubair Hussain aggregated a team score of 223 giving them a huge lead of sixteen strokes over the KP Golf Association. 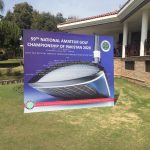 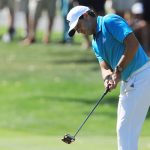